Well… Welll….Wellll….. I always like the strange and very rare releases of french Baskaru imprint and i also like this one, but if you have to choose between a rare french wine and this french release (by a german höhö) you’d choose the wine! I’ll tell you why!

Nowadays most people don’t have any former lifes nor will have any in the stinted future, but I do had a lot of them. This CD reminds me of one very special life as a close friend of mighty Timothy Leary back in the good old days when the air was clean and sex was very dirty my friend - I tell you! We used to hang around on his ranch and as you already read it, every 2nd day some lazy drug addicted band came along and played in front of the house, I was very progressive back then and I kicked ass everybody who simply played drums, git & bass - we wanted modern music, so they bored us to death with silly ambient music, whabber wabbber, squeeeeezzze, oink oink…wabbber wabber…as I said they where very addicted to some shit and some more shit, they got the shit from Tim and his mexican friends, but when those losers couldn’t pay they had to impawn thier instruments especially when they already owned something like a moog.har har… Yes, and in the nights Tim, his wife and even the jung Uma Thurman and me where sitting around with tapedelays, one or two moogs, tapemachines and some gear those addicted guys (I told you musicians)  build by themselfes. We sounded kindly like the new Rothkamm, maybe he also was a close friend of us  back then? Don’t know! All those old recordings where cashed in by the FBI when Tim got arrested in the early 70ies - I’m sure it’s because one of those unfaithful musicians! Now comes in my mind, maybe this is one of those old recordings? So, if you are a stinking hippy fuck you need this CD, if you are a stinky art student you also need this CD, if you are a webdesigner, you already listen to it from rapidshare - i know you bloody wankers! Just kidding ;-) 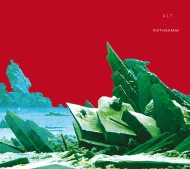